Using data from a unique survey of recent university graduates, researchers from the ESRC Research Centre on Micro-Social Change provide new evidence on the role of strong ethnic ties in determining adherence to recommended health behaviours during the pandemic

The COVID-19 pandemic has not impacted all ethnicities equally in the UK: as early as three months into the first wave, evidence was mounting that non-White British people were much more likely to be hospitalised, and more than two times more likely to die, of COVID-19 than the white British majority, once age and geographical factors were taken into account.

Updated estimates at the end of last summer found this disadvantage had continued, and the Government continues to acknowledge the greater severity and mortality among minority groups in the UK, linking these risks to variation in the demographic, socioeconomic and underlying health vulnerabilities across different ethnic groups.

While socio-demographic factors explain some of the differences in COVID-19 impact across ethnic groups, substantial inequality remains even after occupation, household structure, age, sex, income geography and poverty are taken into account.

One other, as-yet unexplored, mechanism that may underlie ethnic differences in COVID-19 impact is the health behaviours practised by individuals themselves. If different ethnic groups have different levels of adherence to recommendations such as hand washing, mask wearing or maintaining social distance, this might explain some of the inequality we observe in COVID-19 impact.

To examine this question, we used a unique dataset that includes detailed data on COVID-related health behaviours for an ethnically diverse sample of recent university graduates aged between 22 and 25. These data, part of the larger University of Essex BOOST project, were collected from a sample of recent university graduates via a web survey (June 12-July 3, 2020) at the end of the first major lockdown in the UK, shortly before restrictions were eased.

These survey respondents had already participated in four years of data collection prior to the pandemic, during which a wide array of information on their social class background, school performance and friendship networks was gathered. Particularly important for this project, the survey also elicited the subjective expectations of the survey participants regarding their risk of contracting COVID-19, their expected severity of sickness should they contract it, as well as their perceived efficacy of different health behaviours that were officially recommended at the time: hand washing, mask wearing, social distancing, and avoiding non-essential outings and public transport.

These data are not representative of all young people in the UK, and comparisons between our sample with data from the Higher Educational Statistics Agency data and university administrative records show that we surveyed more women, ethnic minorities and higher-performing recent graduates than the average. Still, these data are one of a kind, allowing us to answer not only whether there are ethnic differences in COVID-related health behaviours, but also why this might be the case.

A summary of ethnic differences in COVID-related health behaviours

In Panel A, below, we report the percentage of our sample who reported never engaging in activities which increase the risk of contracting COVID-19 – namely: exercising outside of the home, visiting relatives from outside your household, attending a gathering of more than three friends outside of the household, going shopping for groceries or essential items, shopping for non-essential items, and traveling on public transport.

Fairly consistently across these measures, both Black British and White non-British (mostly European) young adults in our sample were more likely to avoid activities which increased exposure, with the one exception of more frequently taking public transportation.

Asian British young adults were also more likely than their White British peers to avoid exercise and shopping for non-essential items, but were more likely to visit relatives and similarly more likely to gather in larger groups of friends, as well as travel on public transport.

In Panel B, below, we show ethnic differences in our sample in the percentage reporting always practising social distancing and hygiene practices recommended to reduce the risk of contracting or transmitting COVID-19.

In terms of washing hands or wearing a face mask in public, all ethnic minority groups were more likely to report always practising these measures than their White British peers. For social distancing of at least two metres in public, the evidence is more mixed, with White British young adults more likely to social distance than their Black British and Asian British peers, but less likely than White non-British young adults.

In general, however, young adults from different ethnic minorities in our sample were more likely to adhere to recommended COVID-19 related health behaviours than White British young adults.

Having observed these ethnic differences in COVID-19 health behaviours, we next sought to explain them. We know from the existing literature that the profile of different ethnic minorities differs from the White British majority in many ways that might explain why they behave differently in relation to COVID-19. Some differences, such as their age profile and education levels, are already held constant in our study because our sample contains only young adults who are university graduates. However, we also examined how the above results changed once we took into account several other potential explanations, as follows:

In general, and contrary to our expectations, many of these factors were not consistently related to health behaviours. Few differences emerged, with the exception that women were more cautious (less likely to gather socially, more likely to social distance in public, and more likely to wash hands), and those who lived in suburban areas engaged in more risky behaviours (statistically significantly more likely to gather socially, and less likely to social distance than those living in rural areas; differences with urban residents were not significant).

Public transport was perhaps the most socially patterned behaviour: not surprisingly, those living in urban and suburban areas, living away from families, and working away from their home were much more likely to use public transport.

In contrast, controlling for ethnic differences in socioeconomic background, living situation and working lives, there were no remaining ethnic differences in the likelihood of gathering with friends or shopping for essential items. Asian British young adults were less likely to always social distance, while their Black British peers were more likely to use public transport.

The differential impact of COVID-19 by ethnicity, in terms of both the likelihood of contracting the virus and its severity, was already well publicised at the time of our survey. We therefore surmised that differences in adherence to recommended COVID-19 related health behaviours was a rational response to higher levels of perceived risk among ethnic minority groups.

To test this hypothesis, we elicited the subjective expectations and attitudes of survey respondents. Respondents were asked to rate the maximum and minimum probability, on a 100-point scale, of the likelihood that they would die if they contracted COVID-19, and also the likelihood they would be hospitalised if they contracted COVID-19. This measure enabled us to take into account not only different perceptions of the severity of the virus, but also different levels of uncertainty in assessing its potential severity.

We also asked respondents to rate the likelihood of contracting COVID-19 under two scenarios: a high-risk scenario, where they visited family members and friends outside their household every day, used public transport and went shopping every day, and never wore a mask, and a low-risk scenario, where they never visited family members or friends outside their household, only went shopping once per week, never used public transport and always wore a mask. The differences between these two scenarios are displayed below as the perceived efficacy of safe behaviours.

Finally, we asked respondents about their preference for state income redistribution in a battery of five questions, on a seven-point scale, and used the average as a proxy for trust in government in general.

As can be seen in Panel C, below, there are only very small differences in the subjective expectations of COVID-19 severity among our sample members by ethnicity, and only Black British young adults differ from White British peers in their perceived efficacy of health behaviours. Both Black British and Asian British young adults show a higher preference for redistribution, a proxy for trust which might explain their higher adherence to public health guidelines.

Subjective expectation of severity of COVID-19, efficacy of safe behaviours, and preference for redistribution

A final explanation for ethnic differences in COVID-19 related health behaviours may be norms that are specific to minority communities. These norms may be general, such as stronger preferences for state intervention which may prompt greater adherence to public health guidelines, or they may be specific to the health behaviours themselves – for instance, culturally patterned norms of handwashing, wearing face coverings, or maintaining social distance in public settings.

The fact we cannot explain ethnic differences in health behaviour adherence even with an extensive set of sociodemographic controls, as well as our very unique measures of subjective expectations, suggests that unobserved ethnic norms surrounding COVID-related health behaviours may underlie the remaining difference.

While we have no direct measures of such norms, we can triangulate information on ethnic attachment to test whether adherence to recommended COVID-related behaviours is stronger among those who are more likely to be exposed to ethnic minority norms. To do so, we examine how ethnic differences in health behaviours vary among those with a higher and lower proportion of close friends of the same ethnicity.

In the charts below, we illustrate the relationship between ethnicity, friendship network composition and health behaviours for both hand washing and gathering with friends. It is clear that ethnic minority young adults with a higher proportion of same-ethnicity friends show stronger levels of adherence to many recommended health behaviours than those who were less attached to their co-ethnic community while at university.

There is not space to illustrate all these differences here, but Black British minorities with a higher proportion of co-ethnic friendships are less likely to exercise outdoors, less likely to visit relatives outside of their household, less likely to gather with friends, and more likely to wear a mask than those who have a more mixed friendship network. Similar results are found for Asian British young adults, who are significantly more likely to wear a mask when they have a higher proportion of co-ethnic friends, as well as less likely to exercise, to visit relatives, and to gather with friends (although these differences are not statistically significant).

The only COVID-related health behaviour with consistently lower adherence among minorities with stronger ethnic attachment is using public transport, although here the differences were not statistically significant. 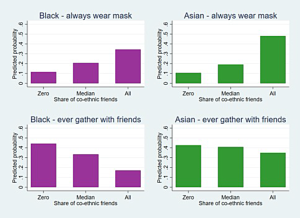 Against expectations, we found these ethnic differences were not explained by differences in perceived risk of COVID-19 or health behaviour efficacy, but rather, were strongest among minority group members with more ethnically homogeneous friendship networks.

These findings provide further evidence of the ethnic embeddedness of health behaviours and the potential health benefits of ethnic attachment. Minority group members with a higher proportion of minority ethnic friends observed health behaviours that were more protective against COVID-19.

This research also shows that health behaviours are responsive to risks, as those who perceived greater risk to themselves were more likely to distance, wear masks and wash hands, and those who perceived greater risks of transmission to others reported less social interaction. However, ethnically structured social norms are certainly also important, and collecting data on people’s beliefs from ethnically diverse samples is necessary both for targeting public health messages and assessing how successful they have been.