The geographical complexities of COVID-19: Why are different places showing different rates of recovery?

The pandemic has illuminated the different types of economy that exist across the UK, and how these interact with levels of socioeconomic deprivation. So how should these insights inform the UK Government’s ‘levelling up’ strategy?

There is no simple story to tell of places’ experiences during the pandemic. There is no simple North vs South, England vs devolved nations, or urban vs countryside. But what the pandemic has illuminated is the different types of economy that exist across the UK, and how these interact with levels of socioeconomic deprivation. For example:

So how do we make sense of the complex geographical variation in COVID impacts? And in terms of recovery, what does this tell us about the challenges the UK Government faces in ‘levelling up’ different regions of the country? In our recent report Prosperity and Justice after the Pandemic, the Institute for Public Policy Research (IPPR) attempted to answer this question.

The UK economy is grossly unequal, and the pandemic has further exacerbated these inequalities. Furthermore, there are risks that the same inequalities in health, education, investment and productivity that meant we went into the pandemic especially vulnerable will cause the recovery to be unequal too.

To understand the different impacts of the pandemic, we must look at inequalities across three separate dimensions: the spread and mortality of the virus itself; the effect on jobs and work; and the ability of places to bounce back from the pandemic.

1. Spread of the virus

Deprived areas have suffered significantly higher rates of infection and mortality during the pandemic. In the first wave of COVID-19, death rates in the UK’s most deprived areas were more than double those in its least-deprived areas (by decile), and were substantially higher across the ‘Northern Powerhouse’ regions than in the rest of England. In post-industrial areas, rates of confirmed COVID-19 infections were 10-20% higher, and the cumulative death toll 30% above the UK average. These inequalities persisted in both the first and second waves of the pandemic.

The burden of pre-existing poverty, chronic disease, stress, smoking and obesity meant the UK was unusually poorly prepared for a pandemic. And health underpins our economy in a fundamental way: productivity, growth and labour market participation are all closely linked to health and wellbeing. This means there is a significant risk that some of the challenges of the pandemic may be self-propagating. Health, economic and educational disadvantages came together in pockets of severe deprivation and vulnerability.

2. Impact on jobs and work

Some places were more affected by lockdowns and social distancing than others (not least, those with an abundance of workplaces such as shops, factories and restaurants), meaning they had very different economic experiences. For example, because of the higher rates of infection (and in the views of some, the biases of politicians and policymakers in Westminster), areas of the north of England were put under the strictest ‘tier 3’ lockdown measures for the longest time.

Areas particularly reliant on tourism or hospitality were harder-hit by lockdown, while some industries that have been especially affected by government restrictions and changing consumer preferences, such as aviation, are also geographically concentrated. On the other hand, Greater London and the South-east of England exhibited the highest potential for remote working, with 70% of people who live in Richmond-on-Thames working from home during the first wave, compared with only 14% of people living in Middlesbrough.

As the furlough scheme comes to an end, we are yet to see how many of the more than one million people still furloughed will become unemployed. However, we do know that one of the biggest challenges of the recovery will be re-skilling those who have lost their jobs. As the IPPR has demonstrated, most of the jobs lost during the pandemic were low-pay and low-skill, while most of those created were at a higher skills level. For example:

While this is an opportunity for some people to move into higher-paid jobs (undoubtedly a good thing), others – in particular, older workers – will require reskilling. This means that places with higher levels of vocational education or more accessible schemes are more likely to recover more quickly, with people being able to transfer into reskilling and education programmes and then back into work.

Of course, we should also acknowledge that the jobs lost and created during the pandemic may not have been in the same location, presenting a potentially even greater barrier to reemployment.

3. The ability of places to bounce back

While the UK economy is beginning its recovery from the COVID-19 shock, we should be cautious for several reasons:

The linked health and jobs crisis, compounded by geographical inequalities in skills and investment, means the pandemic risks exacerbating pre-existing divisions, as some of the most deprived areas are where new jobs will be slowest to appear and where deprived town centres are most fragile. Businesses outside London and the South-east of England are not confident about the economic outlook, and this is supported by early signs of poor recovery in consumer spending in the North-east of England and Scotland.

Whatever the metric used, the UK stands out as one of the most economically unequal countries when compared with similar nations. Be it productivity, disposable income or unemployment, there are few developed countries with similar geographic inequalities. And these inequalities cannot be separated from the fact that the UK has one of the most fiscally centralised systems in the world (see Fig.1).

Fig.1: The UK is the most fiscally centralised of comparable nations
Various measures of fiscal centralisation (bubble area = country population) 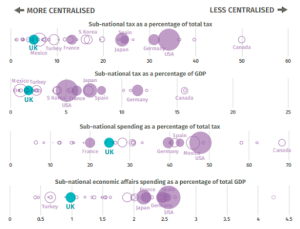 Most economic decision-making is controlled from Westminster and Whitehall. In England, this means that control over taxation and spending, as well as wider policymaking such as labour market policies, transport planning and investment decisions, is all done in London. The result is vastly less spending in other parts of the country: for example, spending on economic affairs is £541 per person less in the North of England than in London (see Fig.2). This also leads to decisions being made that do not work for local communities elsewhere in the country. 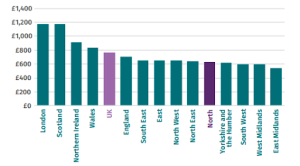 Two key strategies to support a ‘levelling up’ recovery

As the UK struggles to recover from the pandemic, the Government is separately pursuing a ‘levelling up’ policy agenda focused on remedying regional economic disparities. Yet what’s clear from the story both before and during the pandemic is that targeting the root causes of these problems has to be part of this levelling up strategy if the UK is indeed to ‘build back better’. It will be impossible to increase regional economies without first addressing underlying levels of poor health and low educational attainment in our different place-based economies.

The IPPR’s report connects these long-term issues of regional inequality to a long-term centralisation of economic decision-making. Such power imbalances are less pronounced in Scotland, Wales and Northern Ireland compared with England, as a result of a policy of devolution followed by the former New Labour government. However, many important powers in relation to shaping economic strategy remain reserved to Westminster – and in particular, to the Treasury.

The Treasury is a finance ministry not an economic development ministry, and as such it has sought to prioritise net aggregate growth and tax revenues rather than regional economic development. The limited and piecemeal devolution processes that have taken place fall well short of passing down the powers and investment needed to reform our current economic model – with most areas still not benefiting from even these arrangements.

To get back on a path towards remedying this, the IPPR proposes two key actions as part of the UK’s Government’s levelling up agenda:

The UK Government should end the centralisation of investment decisions being made in Westminster, and give communities decision-making powers for tax and borrowing. This should include a range of policy areas: from transport to housing, and enterprise support to high streets. Furthermore, local leaders should give citizens themselves real power over these decisions.

The UK Government should commit to matching London’s levels of investment spending across the entire country. Spending on infrastructure (e.g. transport) and economic innovation (such as R&D) is inequitably distributed across the country. Replacing the existing pots of funding with a fair formula for allocating to cities and regions would mean no longer delegating regional investments through centrally administered pots of funding, requiring bids to the Treasury that attract accusations of ‘pork barrel politics’. Rather, funding would be predictable and transparent, with devolved authorities being accountable for this investment.