Born amid the devastation of COVID-19: a new index of civic strength for London

The Young Foundation’s framework for measuring the power of local communities – commissioned by the GLA and co-designed by Londoners themselves – uses 75 indicators to capture how civic strength differs throughout the capital, and how it can be harnessed to tackle future crises

COVID-19 has devastated communities across the country with lost jobs and lost lives, and with already-wide inequalities being forced even wider. The response in the UK’s capital city has been led by the London Recovery Board, chaired jointly by the Mayor, Sadiq Khan, and the Chair of London Councils, Georgia Gould. Their challenge has been to reverse the lost economic growth caused by the pandemic and to support the city’s communities to flourish once more, particularly those hardest-hit by the virus.

In support of this mission, last year the Greater London Authority (GLA) commissioned The Young Foundation to lead an inquiry into civic strength in London, with the aim of producing an ‘index’ that captures what matters most to Londoners when they think about the strength of their local communities.

The intention was emphatically not to rank the wards of London from ‘civically strongest’ downward, but instead to better understand the different components of civic strength and to uncover the complex interplay of factors that contribute to civic life (enabling mapping as illustrated below). This was as much about looking forward to the route to recovery and mitigating the impact of future crises as it was to understanding how different communities stood up to the multiple challenges of COVID-19. 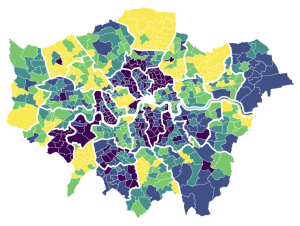 The academic literature on civic strength contains much debate and little consensus. Following the lead of the Civic University Network, a new partnership of UK universities working together to promote greater civic involvement by higher education institutions, The Young Foundation developed a framework that was co-designed and co-created by Londoners themselves, to understand where they believe civic strength exists and to capture what makes it unique in different communities across the capital.

This led to a general definition that ‘civic strength exists when communities are supported by robust public and social infrastructure to build strong relationships and feel able to meaningfully engage in the issues that matter to them’.

Responses from across all community and stakeholder workshops were collated and coded by theme, before being sorted into three overarching themes and 12 individual domains (see illustration below). These covered everything from perceptions of personal safety and voter turnout in local elections, to levels of volunteering and number of foodbanks.

In total, 75 indicators of civic strength were agreed across the 12 domains, even though existing datasets were only available for 49 of these. Revealingly, the largest evidence gap was in the Democratic Engagement theme, on issues around accessibility and institutional trust; the smallest was in the Public and Social Infrastructure theme, where the only data missing was on use of community spaces. 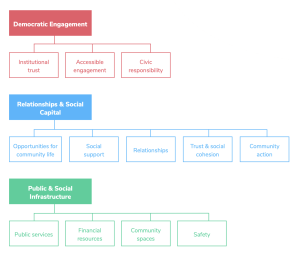 What can we learn from the ‘missing’ indicators?

Rather than drawing a discreet veil over this lack of data, this first iteration of the Civic Strength Index acknowledges their vital importance. We are confident in the definition of civic strength co-developed by Londoners and in the collaborative approach taken by them and our cross-sector panel of experts to identify, sift and prioritise potential factors. So, for example, workshop participants repeatedly highlighted the importance of trust and relationships within local communities. Yet try as we might, we were unable to find data to measure these essential ingredients to civic strength in robust and consistent ways.

In a narrow sense, this prevented us from forming a complete picture of the distribution of civic strength across the capital. But it also highlighted the gap between what ‘real people’ think is important, and what those collecting official statistics think.

What this tells us about the perception of civic strength, and how we can fully value all elements that contribute to this idea of strong communities, is that it is often the intangible elements of communities – the elements that make us ‘feel’ a part of something – that are most important in determining how ‘strong’ a place is. It is people’s sense of community, being made to feel as though they belong and have a stake in a local place, activity or community, that is the most important factor in creating community identity and strengthening civic connections – yet it is precisely these things that have proven the hardest to measure.

So where do we go from here?

Hard to measure does not mean impossible, however, and as the GLA moves into the next phase of pandemic recovery, it aims to respond to the calls to action set out in The Young Foundation report, and to:

In the words of Dr Debbie Weekes-Bernard, the GLA’s Deputy Mayor for Communities and Social Justice, we want to make sure that London’s communities are ‘empowered to engage in the issues that matter most to them, [so that we] develop a better understanding of local communities in London – how to better engage with them and respond to their needs. This will help to create a fairer, more equal society as we recover from the pandemic.’

Our aim is that, as the robustness of the evidence base is built out, the Index will be used by communities, civil society organisations, policymakers, funders and commissioners across the capital as a new lens for understanding the strengths of local places, and how these strengths can be mobilised to make them more resilient to future crises.

Over time, we also want to explore how civic strength interacts with other key surveys and measures of community life, such as the Indices of Multiple Deprivation and the Living Costs and Food Survey. Beyond that, we would love to see the Civic Strength Index extend outside the boundaries of London.

We hope that our innovative approach to understanding civic strength, guided by what matters to communities rather than by what can already be measured, starts a bigger conversation among policymakers across the UK about what we should be putting at the centre of policy design. We want the Index to spark a national conversation about how we measure the elements of civic strength that make us ‘feel’ a part of something – and ultimately get to a point where these elements are recognised for their true value, in policymaking and beyond.

Hannah Goulding is the Principal Civil Society Officer at the Greater London Authority. Richard Harries is Associate Director of the Institute for Community Studies at The Young Foundation