This is a summary of findings and recommendations from a review of basic income experiments in OECD countries by the Institute for Policy Research, University of Bath, and IPPO. 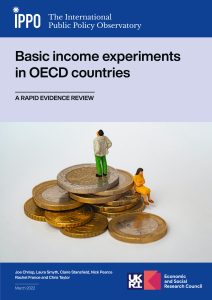 Since 2015, there has been a surge in political and media interest in a universal basic income (UBI), which has led to a growth in social policy experiments tied to this idea. The payment of a regular income to everyone in society, with no strings attached. This report provides an evidence-based summary of existing experiments for policymakers.

We identified 38 relevant experiments, 21 of which had been completed by November 2021.

What did we find?

How to meet research goals:

How to meet pilot goals:

How to meet political goals:

This report aims to provide an experimental design ‘tool-kit’ for policymakers by drawing on past experiences of governments in OECD countries.

Our rapid evidence review gives a comprehensive and systematic mapping of all UBI experiments that fall within our criteria. The review compares the characteristics, key results and policy outcomes of all the experiments in OECD countries that we have included and highlights some common themes.

The review identifies 38 experiments that fit our criteria, although many of these are within the same context or receive similar funding, such as the four negative income tax experiments in the US in the 1960s and 70s and the ten experiments conducted by Dutch municipalities between from 2017.

How to design a UBI experiment: 3 Key Factors

Careful consideration should be paid to the sample size and the simplicity of the design to enhance the robustness of the evidence.

It is essential to use a design that would be fiscally and legally feasible for that level of government to implement. This has not been the case in many past experiments, which inevitably limits the extent to which policy reform can be initiated that directly builds upon lessons from the experiment.

A key aim of the experiment is to persuade others that may have the power to implement such a policy. Designers of experiments here must tread a fine line between wanting to convey the reliability of their findings, precisely to strengthen the message that their policy intervention works, or to involve themselves more directly in outreach efforts and political campaigning alongside the experiment.

This is a trade-off because the latter risks falling foul of RCT guidelines and avoiding any outreach or campaigning risks entirely losing the public relations battle in framing the purpose and findings of the experiment.

For more information about this IPPO systematic review or to speak to one of its authors, please email IPPO at ippo@ucl.ac.uk